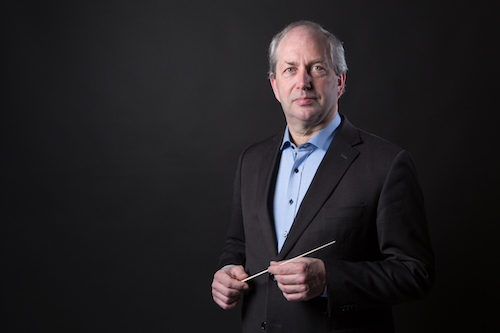 Professor Maurice Hamers was born in Valkenburg, The Netherlands, in 1962. He studied conducting and trumpet at the University of Maastricht. He was 19 years of age when he began conducting fanfare, symphonic and brass bands, winning seven National Championships.

He was awarded the coverted “Silver Baton” at the World Music Contest “Conducting Com- petition”, in Kerkrade, in 1989.

Prof. Hamers was appointed principal conductor/director of the Marine Band of the Royal Dutch Navy, based in Rotterdam, in 1995, where he produced many recordings. Under his direction, the band was awarded at the Amsterdam Concertgebouw with a Platinum Prize for their CD “Homage to St. Petersburg”.

In 2000, Prof. Hamers was appointed as Professor of Conducting and Instrumentation at the University of Nürnberg-Augsburg, in Germany and took on as well as the post of the conductor of the university’s famous and multi-talented symphonic band.

Now, he is Professor of Conducting and Instrumentation at the “Bläserinstitut” at the University of Augsburg and renowned for his quality schooling, insight and inspiration.

In 1991 Prof. Hamers career as a composer began at the European Brass Band Championships, when his composition “Chameleon”, for Eb tuba and brass band, won first prize in the entertainment section for the best international solo composition.

In addition to his teaching and composing, Prof. Hamers is in high demand as a guest conductor of professional international symphonic bands, and as an adjudicator at international competitions.